If you were reading my facebook page yesterday you will have noticed there has been a momumental change in the marriage laws, namely the time you can now marry.

“From today, October 1 2012, the UK will join the 21st century as outdated restrictions on marriage and civil partnership times are removed. The Home Office have announced that people wanting to get married or register a civil partnership will now be able to do so any time of the day or night under the Protection of Freedoms Act. Couples were previously restricted to between 8am and 6pm. “

The New Law Doesn’t Apply to Church of England Ceremonies

At present, both canon law and the 1949 Marriage Act say that weddings can be conducted only between 8 a.m. and 6 p.m. The restriction in the Marriage Act will be lifted from 1 October, when provisions in the Protection of Freedoms Act come into force. But the new law does not amend canon law. 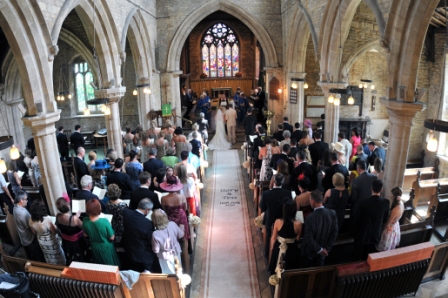 But will the venues want to do ceremonies at midnight or later?

Local authorities will not be forced to conduct marriages outside the traditional hours so it remains to be seen how in reality this change in law will affect the majority of weddings. Yes, some venues will do well from a midnight or 3am ceremony a-la vegas style (think blackpool tower or tower of London) but I think that will be the minority.

What this law does mean is more flexibility

Not every couple want to have a full day of drinking and eating, many say to me they want a wedding more reminiscent of a Mediterranean wedding. They want the wedding to feel like they have just gone out for a dinner, albeit a luxury one.

Of course, having a later ceremony can help with the budget restraints as a later ceremony means evening food is unnecessary and if you are paying for all the drink, less drink is going to be consumed. I can see 6pm being a popular time to marry as this still gives couples some time in the evening to celebrate with family and friends.

Emphasis on a leisurely meal. No fuss or frivolity, I’ve shortened the ‘drink reception’ into a cocktail hour as I feel this will flow better. I’ve allowed longer for the meal in case of cheese & port courses!

Emphasis on a having an evening party more similar to evening balls. Again I’m allowing an hour for the drinks (normally it’s 1 ½ hours) , slightly less on the meal but some time for dancing!

Ok so I know we don’t have the evening heat of the Mediterranean but an evening ceremony lit by fairy lights, lanterns orlittle candles – just imagine how pretty that will look. 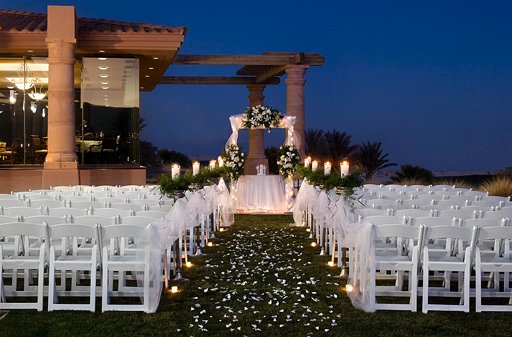 But of course you might decide to hire a lighting speciaist to light up those trees and have fireworks released just as you finish exchanging vows. 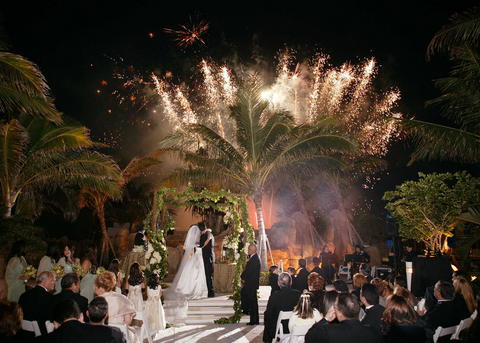 “Being able to have an evening ceremony really does provide a fantastic opportunity to create a real atmosphere with the use of a tailored lighting design. Any number of ideas can be utilised to ensure you get exactly the look and feel that you’re after. For example, fairy lights can be used in their thousands to create a magical, intimate setting or coloured lighting can be used to highlight your venue and help unify a colour scheme. The possibilities are almost endless!” James, Wedding Creative 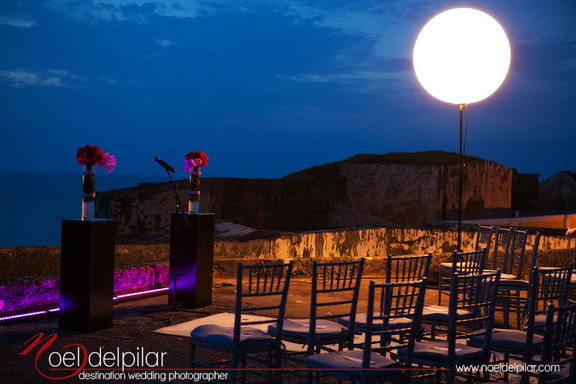 What about the photography?

If you’re worried about not having any daytime images why not adopt a little trend from the U.S and ask your photographer to do a ‘First Look’. There is where some private shots are done before the ceremony – I’m not going to explain this is full details because Michelle – pocketful of dreams does it so well and has many images for you to look at as well! Below is an image from a wedding planned by Californian planner, Whitney Drake. The beauty of the ‘First Look’ is you get some daytime shots of you as a couple then beautifully lit ones of the ceremony and wedding breakfast etc.

“I think it’s great that couples have an opportunity to get married at whatever time they want, obviously it makes my job more challenging in terms of lighting the wedding but I would brief my “Bride & Grooms” beforehand so they are aware of the type of photography they will be restricted to. To me a wedding should be whatever the bride & groom wants, if only they could lift restrictions on where you can get married…..now that would interesting” Jasmine Photography

But what do you think?

Whether you are getting married or if you’re a venue or supplier, I’d love to hear your thoughts.

Outside ceremony with the moon Noel Delpilar

Outside ceremony with trees lit up: Trump Int’l Beach